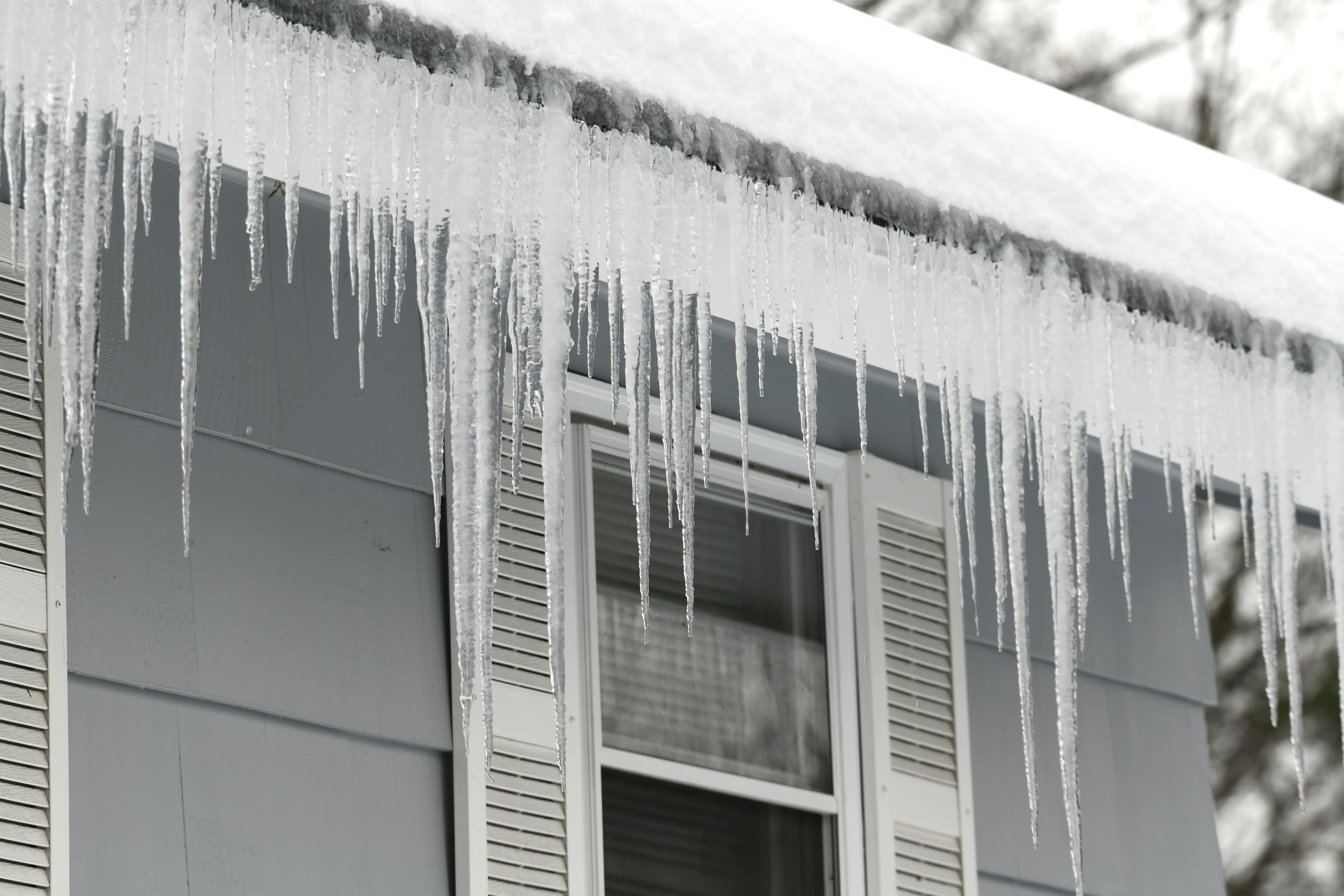 Keith lives in Saskatchewan, where the temperatures constantly drop below zero degrees. It snows a lot and as a result the roof of his house often gets a heavy deposit during winters.

As of late, he has started noticing something interesting. He sees that the snow on the edge of his sloped roof has started melting. But, instead of melting completely, it has formed pointy icicles.

At first, when he saw the icicles, he thought they looked picturesque. However, a sense of worry soon began to engulf his thoughts. Keith’s grandchildren often visit him and therefore he feels that anything pointy hanging from the top of the house could be dangerous.

What bothers him more, however, is trying to figure out what those icicles are and why they appeared in the first place. Is it because of the fluctuating temperature or is there a problem with his roof?

To answer Keith’s questions, those icicles have formed because of a phenomenon called ice damming. And, yes, it could be because of either of those reasons.

What is an ice dam and why is it dangerous?

An ice dam is a block of snow that forms on the edge of a roof. As the name suggests, it’s a dam that traps water (produced due to melting snow) behind it and stops it from draining off the roof. 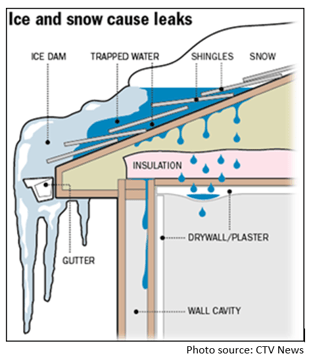 As the dam is being formed, some of the water freezes to turn into icicles as it reaches the very end.

Once there is excessive stagnation of water behind the dam, some of it may seep through the roof into your home and cause serious damage to the insulation, the drywall, and the electrical systems. If left untreated for a longer time, it might even damage the floor, ruin carpets, and cause cracks in the walls.

The seeped-in water can also lead to the formation of mold, which as we all know can cause a host of respiratory illnesses and asthma.

But why is it that once the snow melts it freezes back into a dam when it reaches the edge of the roof? As Keith wonders, shouldn’t the water just keep flowing off the edge?

Let’s answer that question by looking more in depth about the causes of ice damming.

One of the major causes of ice dams is that the roof of Keith’s house is not uniformly heated.

Due to this, some parts of his roof are warm (above freezing temperature) while other parts are cold (below freezing temperature). This non-uniformity leads to the snow melting on the roof top, where it is warmer, and then freezing back into ice when it reaches the colder roof overhang part.

Another cause may be the onset of warmer temperatures. In Saskatchewan, where Keith lives, fluctuating temperatures during late winters or early spring can lead to the snow melting and then quickly freezing as it reaches the edge of the roof.

Protect your home from damage against from water, fire, theft, and other unexpected events!

How to treat the problem of ice damming?

Now that Keith knows what caused the formation of the ice dam, he’s eager to find a solution to fix the problem and implement methods to prevent things like these from happening again.

When it comes to executing quick-fix solutions, here are a few of his options:

As a temporary measure, Keith can limit the damage caused by the ice dams by creating a channel near the edge of the roof by pouring hot water to start melting the existing dams.

Doing so will temporarily allow the water from the back to flow through and not turn into icicles. This will reduce the probability of water seeping in through the roof.

It’s important though that he doesn’t forcefully break the ice dam with a tool like an axe because that might inadvertently cause damage to his roof.

This method does have its safety concerns. Climbing up to the roof during winters with a container of hot water could lead to Keith slipping, falling, and burning himself. Therefore, if he decides to implement this method, he must do so by practicing extreme caution.

Another option that he has is to climb his roof (carefully, of course) and remove all the excess snow from the top. If there is no snow, there is no possibility of it turning into an ice dam.

A disadvantage with this option is that it’s not sustainable for a long time as he would have to climb his roof and remove the snow every time it snowed. Good luck with that, Keith.

3. Call in the experts

Finally, if he’s looking to completely solve the problem, Keith has the option to call in experts who can help him remove the ice dams.

He can also choose to hire contractors who can help him keep his roof and gutters clear throughout the season, thereby eliminating any ice dam formations.

How to prevent ice dams on roofs?

Temporarily fixing a problem means that it will re-occur in the future. Therefore, for permanently preventing ice dams from forming on his roof, Keith has the following options:

If Keith’s looking for a cheap way to ensure that ice dams don’t form on his roof, he can get a roof rake and keep removing the excess snow from the top throughout the winter season.

Since Keith has a one-story house, using a rake to remove excess snow would enable him to get almost all the snow off. However, houses that are taller than one-story, using a roof rake might only be beneficial for removing the snow from the roof overhang areas, where ice dams form.

2. Ensure your roof has proper insulation

If the non-uniformity in roof temperatures is what is making the snow melt, Keith must rectify the problem and ensure that his roof is well insulated. Depending on the exact problem, he can either add more insulation to the roof or seal any existing air leaks.

Some of the areas where the air/heat leaks through to the roof (and consequently melts the snow) are around the trap door to the attic, plumbing and ventilation ducts, lighting fixtures, and chimneys.

If fixing the roof isn’t a viable option or the ice dams are formed due to other reasons, Keith can choose to install electric heating cables on the edge of his roof that will artificially keep the temperature warm.

Doing so will ensure that the snow, which melts into water, doesn’t freeze back and form an ice dam when it reaches the roof overhang area.

How can CAA help you

No one can predict nature or the calamities that come with it. However, homeowners like Keith can surely be prepared to handle any consequence that befalls their homes due to such challenges.

Researchers say that ice damming accounts for many insurance claims, which can be expensive and inconvenient for homeowners since it requires them to make extensive structural repairs.

Therefore, when it comes to protecting their interests, CAA’s Home Insurance policy provides homeowners with security and peace-of-mind all year round.

Using the CAA water coverage, homeowners get access to a comprehensive product that combines multiple aspects of water damage to ensure that they are always protected.

If you have any questions, contact a CAA Insurance consultant today at 1-800-564-6222 and they will be happy to assist you.

How to Save Money: 44 Clever Tips to Save on Everything

Spring Cleaning: 8 Tips to Refresh, Reorganize, and Revive your Home

When and How to Make a Home Insurance Claim